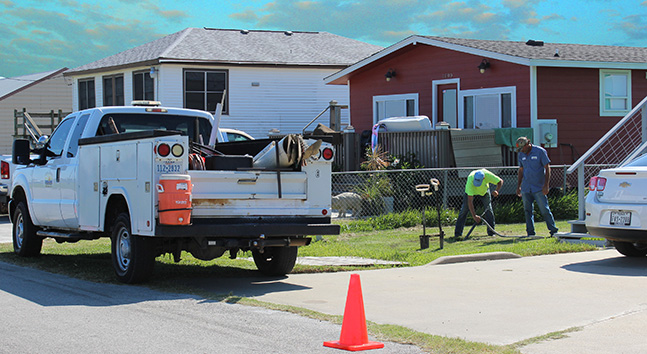 Sheila began her career in 2002 at Jarrell-Schwertner WSC as Business Administrator.  She served in the position of Bookkeeper, then Operations & Control Manager before being promoted to General Manager in 2007.  In 2013 she accepted the General Manager position at Sonterra Municipal Utility District and served in that role for one year.

After a detour into the insurance industry for three years, Sheila completed a Master’s in Public Administration degree through Texas State University.

A lifelong Aggie, Sheila and her family relocated to the Peninsula in 2021 and are looking forward to attending some Aggie games and plugging into the local body of believers.

Barbara began her career with Bolivar Peninsula Special Utility District in 1991 as a Customer Service Representative. She was promoted to her current position of Office Manager in 1994.

Barbara has been a resident of the Bolivar Peninsula for over 40 years. She and her husband, Roger, have two sons, Steven and Jeffrey, and are enjoying their two granddaughters, Dana and Destiny. Barbara is a member of the First Baptist Church in Crystal Beach.

Clifford started working for BPSUD in May 1992 as a meter reader. He was promoted to Assistant Plant Operator in 1996 and to Plant Operator in 1999. As the District grew and became more automated, Clifford trained in computer technology and was made the District’s Technology Specialist in 2002. In 2005, he was promoted to his current position of Utility Systems Manager where he oversees computer automation, plant instrumentation, daily plant operations, System Operators and Meter Readers for the District.

Clifford attended College of the Mainland where he received a computer certification in Novell, Cisco and GIS. He has a Class C Water Operator’s License, Class D Wastewater Operator’s License, a Customer Service Inspector License and a Backflow Prevention Assembly Tester License issued by the Texas Commission on Environmental Quality. He has been a resident of the Bolivar Peninsula for over 20 years.